They can be anything from nursemaids to surgeons, diplomats to assassins. They walk, roll and fly- and communicate in languages ranging from whistles and beeps to Standard Basic to the most obscure alien dialect. MixRMastRs make drinks in spaceport cantinas, Basilisks make war wherever they're deployed, and IT-0 Interrogators make life night-marish for prisoners of the Empire.

Droids are an integral and indispensable part of the Star Wars universe. And this comprehensive guide surveys all myriad models and classes-from the lowliest drones to the most sophisticated humanoid automatons.

Discover the evolution of the R-series droids, whose members include lumbering technicians and skilled X-wing navigators such as R2-D2
Learn the curious history of the MSE-6 "mouse" droids employed exclusively in the bases and on Imperial starships of the Empire
Explore the workings of the malevolent Shadow Droids: machines with living, organic brains
Uncover how the Rebel's fearsome FIDO (Foreign Intruder Defense Organism) carries out is duties
Whatever its design and wherever it may be found in the ever-expanding Star Wars universe, if the subject is droid, its definitive data on development, history, and technology is included in this essential technical guide.

Many of the droids in the old book were removed or replaced in the new installment of the book, mostly being replaced by Clone Wars or New Jedi Order units. 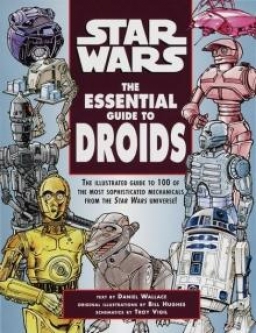