Jedi Master Mace Windu leads a battle against Separatist forces for control of the planet Simocadia!

While the Confederacy of Independent Systems battles for the planet's rare fuel source, and the Republic tries to repel the invaders, the rulers of Simocadia choose a different option to save the planet: awakening the Ardana Shadex, an indestructible mechanized giant that has been sleeping for centuries under the planet's surface! But awakening the colossus could cost many lives and cause more destruction than the current war. Mace Windu races against time and across a dangerous landscape to prevent his onetime friend, Prince Yojan, from causing disaster.

* Star Wars is enjoying a whole new wave of popularity brought on by the Star Wars: The Clone Wars television show, and Dark Horse has a Star Wars graphic novel for fans from every age group! 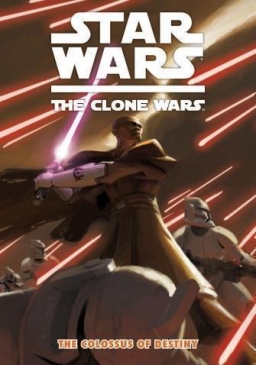